New Orleans, LA is a vibrant city full of culture and life. From the French Quarter to Bourbon Street, there is so much to see and do in New Orleans. The city is known for its delicious food, lively music scene, and abundance of history. Whether you're visiting for Mardi Gras or Jazz Fest, or just looking to explore a new city, New Orleans is sure to exceed your expectations. So come on down and experience everything that this beautiful city has to offer!

There are a number of great places to visit in New Orleans. Some of the most popular tourist attractions include the French Quarter, Bourbon Street, Jackson Square, and Mardi Gras World.

There is a lot to do in New Orleans. In addition to sightseeing, many visitors enjoy taking part in the city's vibrant nightlife, sampling the local cuisine, and listening to live music.

The best time of year to visit New Orleans depends on what you're looking for. The city is busiest during Carnival season (which runs from late January to early March), but many visitors also enjoy the cooler temperatures and smaller crowds in the fall and winter months.

The best way to get around New Orleans is by walking, taking the streetcar, or riding a bike. Taxis are also available, but they can be expensive.

There are a few things to keep in mind before visiting New Orleans. First, the city is located below sea level, so it is susceptible to flooding. Second, New Orleans has a tropical climate, so it is important to pack appropriate clothing.

New Orleans is known for its Creole and Cajun cuisine. Popular dishes include gumbo, jambalaya, and beignets.

There are a number of great places to find live music in New Orleans. Some of the most popular spots include Frenchmen Street, Tipitina's, and the House of Blues.

New Orleans is generally safe for tourists, but visitors should be aware of the city's crime rate and take precautions to keep themselves safe. 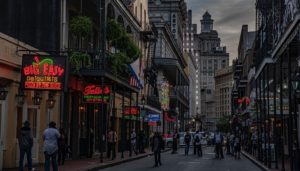